Project Background
A hemispheric dome, clad in more than 1,500 RHEINZINK-prePATINA graphite-grey flat-lock tiles, prominently crowns the new planetarium’s roof at Sacramento Municipal Utility District (SMUD) Museum of Science and Curiosity (MoSaC, pronounced “moe-sack”). In September, it was honored with a 2021 Best Real Estate Projects of the Year award by the Sacramento Business Journal. 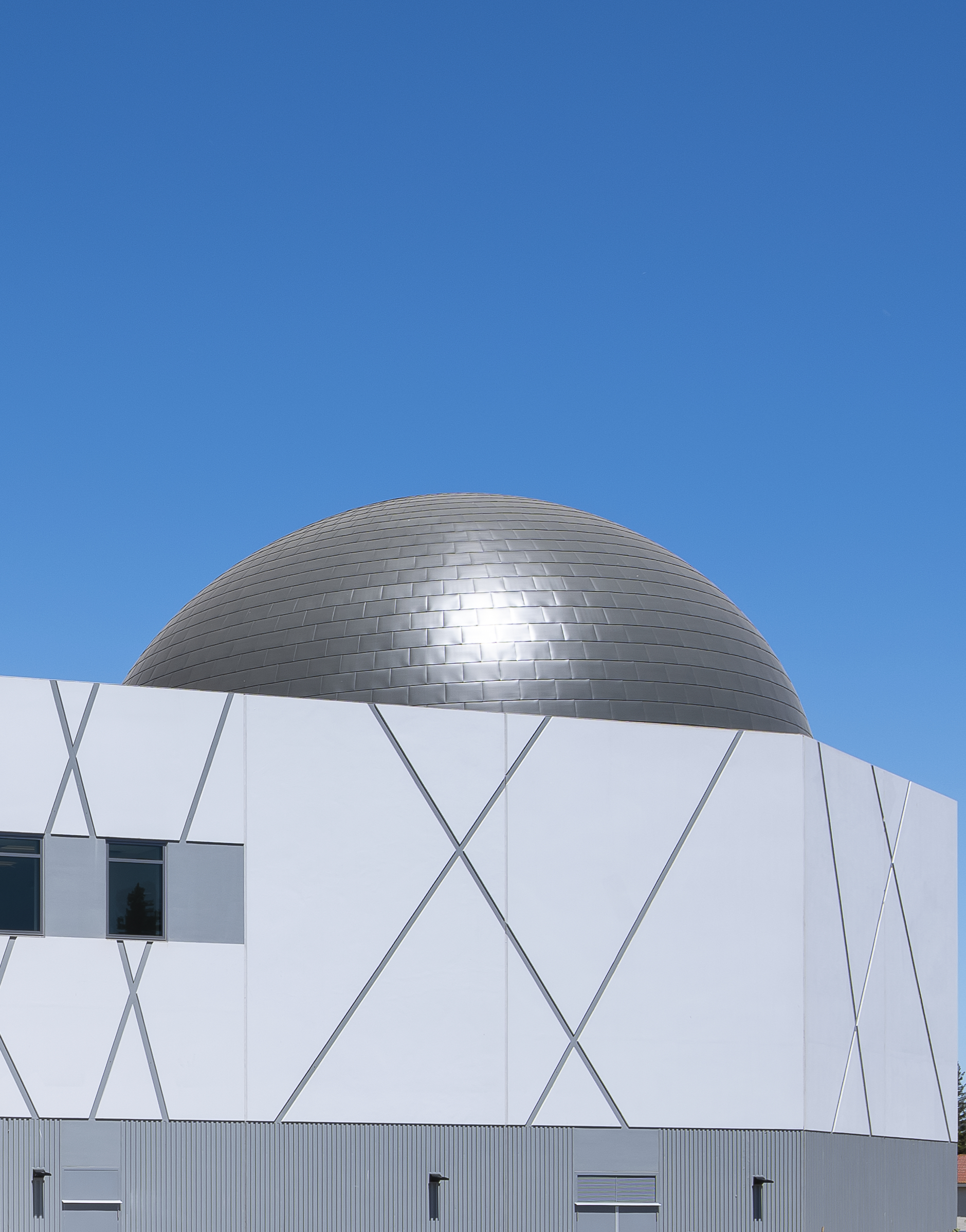 What was the goal?
MoSaC’s new facility is set on approximately 5.38 acres overlooking the Robert T. Matsui Waterfront Park. Demonstrating its commitment to natural and built environments, the museum is pursuing LEED Gold certification through the U.S. Green Building Council for its energy-efficient, sustainable design and construction.

Conceived and realized by the Sacramento-based team of Dreyfuss + Blackford Architecture (D+B) and Otto Construction, the iconic design/build project reimagines a historic riverfront power station as a hub for science education, exploration, and advancement in the Sacramento region.

“The design called for metal with a natural look. Painted metal looks painted. Zinc delivers the natural look and patina, and its soft pliability takes the shape of the roof better and really hugs the curve,” said Louie Rua, president of Rua & Son Mechanical.

Rua noted that his team and RHEINZINK also offered recommendations to avoid “oil canning,” where the metal surface looks wavey and uneven.

“Each row is a little different,” Rua said. “First, we used CAD to visualize the layout on the screen. Then, we worked with Otto to build a 20-by-20-foot physical mock-up that replicated the dome about half-way up. These models allowed us to play with the panels’ thickness, sizes, and dimensions. This helped us make sure they didn’t oil can and were not too small at the top or bottom.”

To maintain an overall symmetrical appearance, the zinc panels were trapezoid shaped and uniformly proportioned for each row, but were sized larger at the bottom of the dome and smaller at its top. SMS provided coils of 0.8mm RHEINZINK-prePATINA graphite-grey, which Rua’s team then precisely fabricated as custom-sized, custom-tapered panels under factory-controlled conditions.

“We put Elias Valencia, our shop foreman for over 20 years, on this project. Using our computerized folding and shearing equipment, he made every one of those panels – from the 32-by-18-inch ones on the bottom of the dome to the 9-by-18-inch ones on the top,” Rua explained. “The panels then went to two of our most experienced zinc guys in the field, Robert Kahaunaele and Anthony Sullivan, who have installed many tons of zinc over the years. Because access was challenging, they often worked off a 135-foot-tall boom lift. They worked together in sequence, row by row, from bottom to top. At the end of the row, a specially formed, interlocking panel zips them together at the back so everything matches. Otto paid careful attention to the dome’s construction. The zinc panels went on flat and tight for a smooth, symmetrical appearance. It turned out great.”

For 15 years, D+B and Otto Construction collaborated on project iterations intended to preserve the historic integrity of the building, while respectfully expanding it for the community’s beneficial use. Otto managed the facility’s carefully phased rehabilitation, renovation and construction. Funding was secured in 2011, a groundbreaking celebration was held in May 2018, and construction was completed in 2021.

Ready to open, MoSaC’s resulting multi-volume structure combines the existing Beaux Arts Classical Revival Style of the prior power station with the contemporary design of the modern addition’s exterior. The zinc-clad roof of the planetarium rises above the building’s interconnected mass.

The facility blends past and future, recognizing the original building’s purpose as a power station and the technological advances of energy production. Formerly known as Powerhouse Science Center, the nonprofit educational institution updated its name to MoSaC in conjunction with its move to the larger facility, approximately 8 miles away from its previous location.

Why is this project significant?
Part of a redevelopment plan in downtown Sacramento, the $83 million museum is housed within the 30,000-square-foot structure of a 1912 power station. A Landmark building listed on the National Register of Historic Places, the Pacific Gas & Electric Company’s Power Station B has remained vacant since it was decommissioned in 1954. At one time, it was the largest power plant north of San Francisco.